5 ways to impress your woman with your cooking

Cooking and sex go great together. A delicious meal can be amazing foreplay, from the preparation all the way to the eating part.

So how do you pull off the sexiest meal ever, guaranteed to make any date 200% spicier? Here are the steps you need to take.

Cooking is a fun activity, to be sure. But in this case, it’s also something you shouldn’t take lightly.

What does that mean? Well, cooking for someone you’re dating isn’t the time to be sloppy or lazy. Heating up a pre-cooked meal may be convenient for you, but it won’t impress anyone. Doing so only shows a lack of commitment and enthusiasm.

Instead, you should pour your heart and soul into it, just like with sex. Soulless sex isn’t exactly awesome, so why should a half-assed dish be any different?

So stick to recipes where you make almost everything from scratch rather than buying premixed stuff. Not only will that show your cooking chops, but fresh ingredients are more pleasing to the senses (in addition to being healthier).

What’s more, a longer cooking time can be more tantalizing, so it’s like foreplay in that regard. To achieve heavenly teasing tension, don’t be in a rush in the preparation stage. Make it nice and slow, neatly slice, dice, or splice every ingredient, and measure everything carefully. All the effort will pay off so deliciously, and drawing the process out can make the experience that much more memorable. 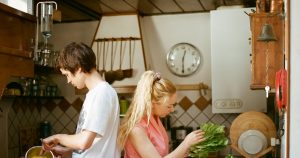 As we said, this is a special occasion. A lazy meal will leave a sour taste in your date’s mouth, and a failed experiment of a dish could taste far worse. To be sure, testing out new foods is great. But it has its place, and this ain’t it.

To make sure your cooking doesn’t go south on date night, make something from your meal arsenal. Stick to something you’re familiar with (or something close to it). Not only will you feel confident when making it, but it’ll also ease some of the anxiety you may be feeling about your upcoming romantic encounter.

If you’re up for trying something new, though, don’t make your date the day of your first attempt. Try making the meal once or twice a week earlier or so. That should give you enough time to work out all the kinks and enable you to reliably replicate the recipe.

Show off your skills

Despite what many may believe, cooking is a performative art. The preparation and presentation of a meal are crucial to making it as delicious as possible. You know what we mean: watching a meal get made can seriously work up your appetite.

Meal preparation really should have an audience, it being so enticing and all. And what better audience can you ask for than a beautiful woman you’re about to seduce?

So, while you’re in the kitchen, be sure she’s right there with you. You want her to see all the chopping, mixing, and stirring. It’ll show how good you are at cooking, as well as get her to start thinking if you’re just as good in the bedroom.

You can also try involving her in the preparation a little. Have her help you out with a small task. For one, she’ll enjoy the food more, having had a part in making it. But it also forces you two to do something creative together, strengthening your bond.

One of the best moves you can pull in the kitchen is making a dish she absolutely adores. That’ll show her how attentive you are to what she says. Not only that, but it clearly demonstrates how much you care about pleasing her.

This should be easy enough to pull off if you two know each other for a while. But it can be a little more complicated if you’ve just met.

That doesn’t mean it’s impossible, though. Watch out for any hints about what she likes to eat. You can also browse her social media profiles in hopes of finding any mentions of food or restaurants. Luckily, food is a fairly common topic (especially for people who are just getting to know one another), so chances are you’ll have at least something to work with.

You may be tempted to ask her what she would like you to make, but don’t do it. It’ll be much more effective if it’s a surprise.

Serve the meal in courses

Presentation, like we already touched upon, matters. So when everything’s ready, don’t just blow your load (if you’ll pardon the crude pun) all at once. Instead, prolong the ecstasy, making it last longer. That way, your date will get to appreciate every facet of the food you’ve served her.

The best strategy is to give her the five-star restaurant treatment. Start with a lovely aperitif to open up her appetite (we’ll get into that topic a little later). Then, whip out the appetizers. Make sure they’re tiny portions, though. Hors d’oeuvre tends to be delicious, and people often overindulge in it, leaving them stuffed before the main course even begins.

Just as her desire for the main meal hits its peak, introduce the main dish. This is the highlight of the whole spectacle, so do whatever you can to make it look amazing. From there, you can move on to the deserts to cap off the event.

Once you’ve sated your hunger, it’s best to slake your thirst, too.

At this point, you’re riding the high of the amazing meal you just shared. As such, it doesn’t really matter what kind of drink you choose since it’ll all taste just that little bit better.

Alcoholic drinks are a fine idea, perhaps the same you had as your aperitif. The food in your stomachs will absorb some of the alcohol you take in, so another drink probably won’t knock you out.